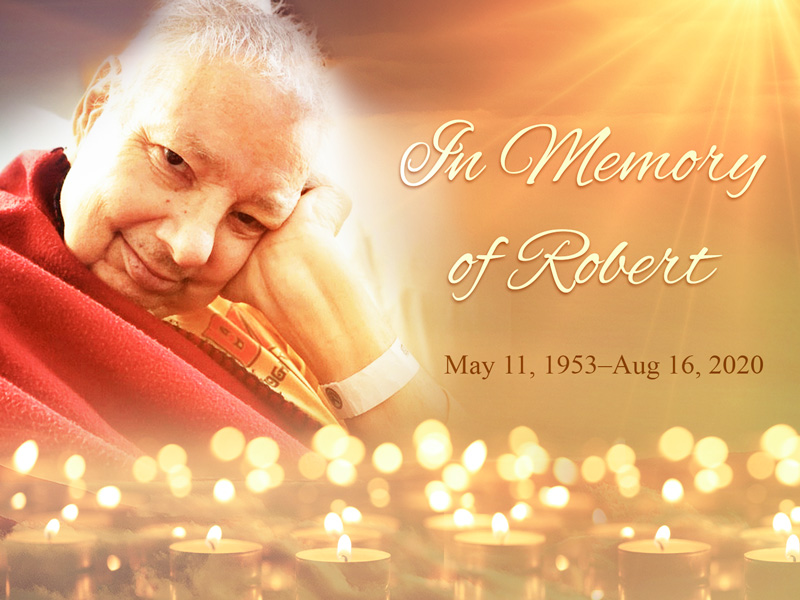 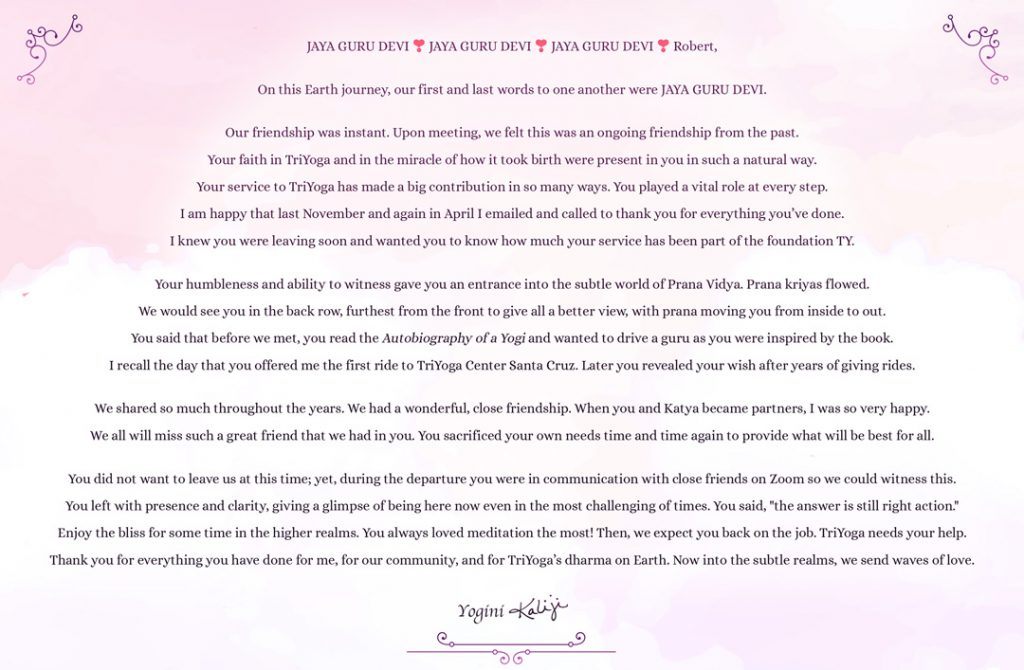 After Robert entered hospice, he spent additional time in contemplation and meditation. He said that he wanted to complete all thoughts. Two weeks prior to his departure, I asked what he had realized from this. These are his words. 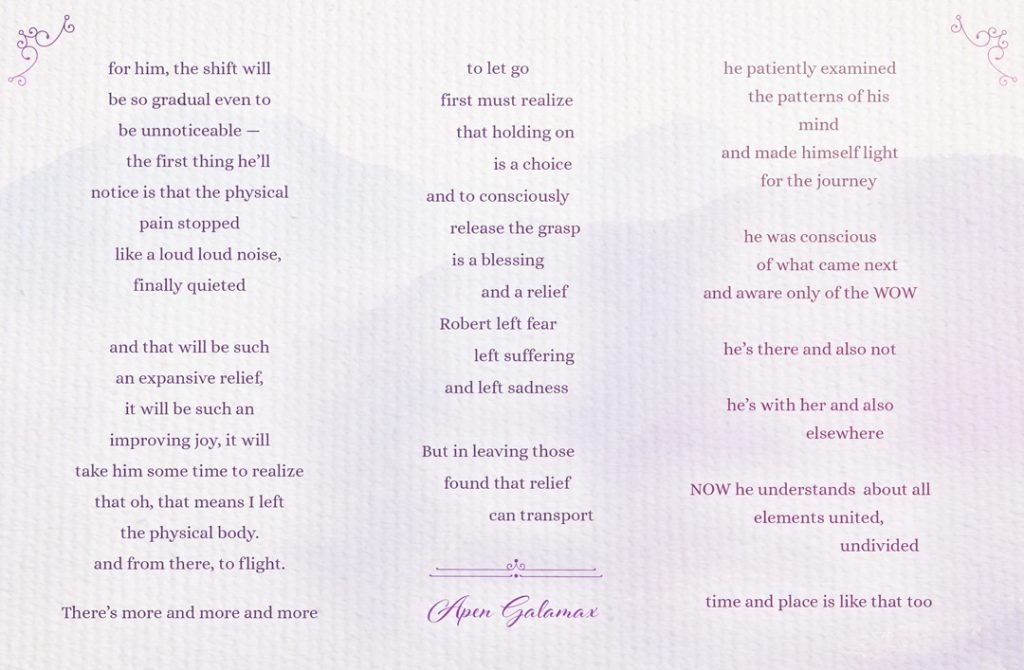 Jaya Guru Devi, Vedic Tribute to Karma Yogi Robertji. He will be missed! Our yogic love and deep condolence to Katya.....Vande Triyoga Mata. It was a timely Vedic & yogic tribute to Robertji
Dr. Raghavendra Pai 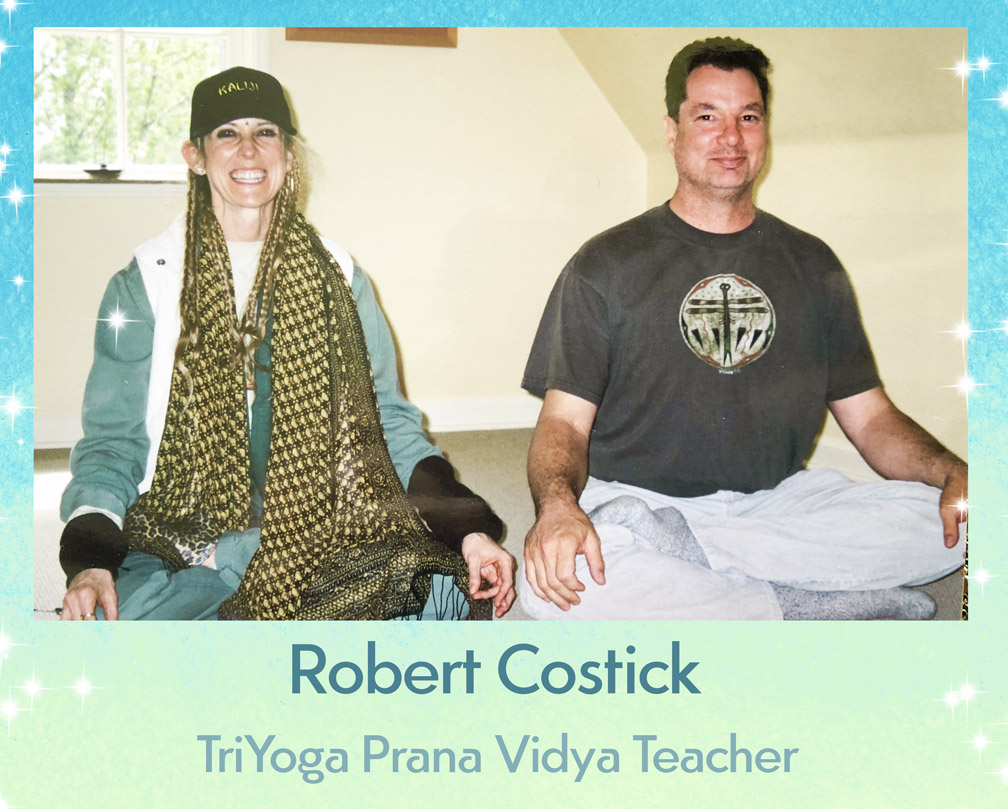 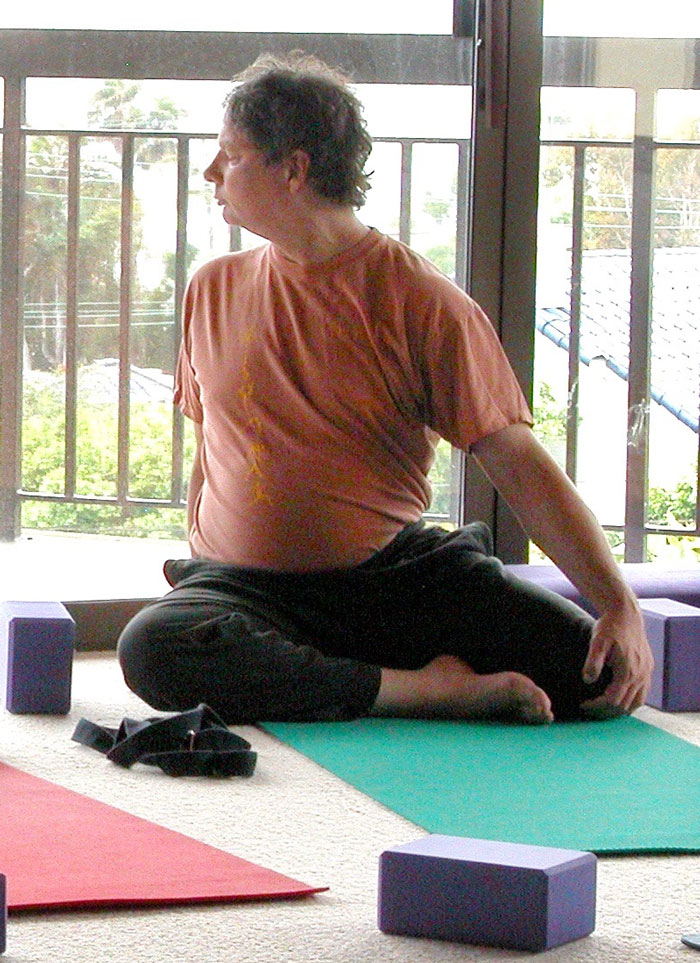 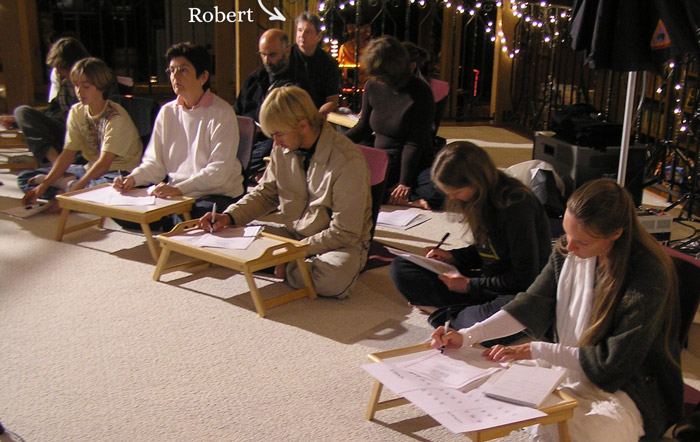 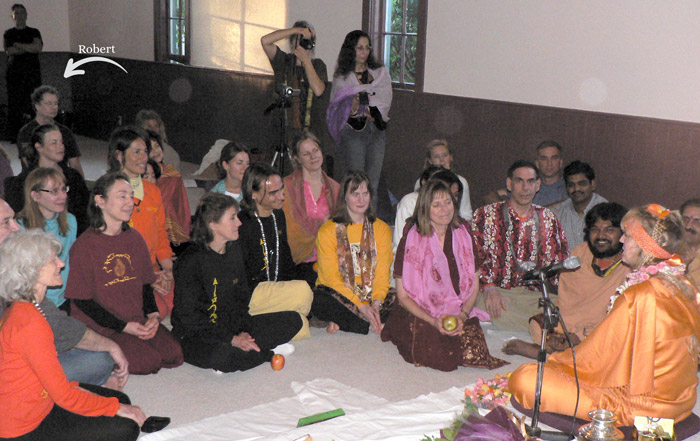 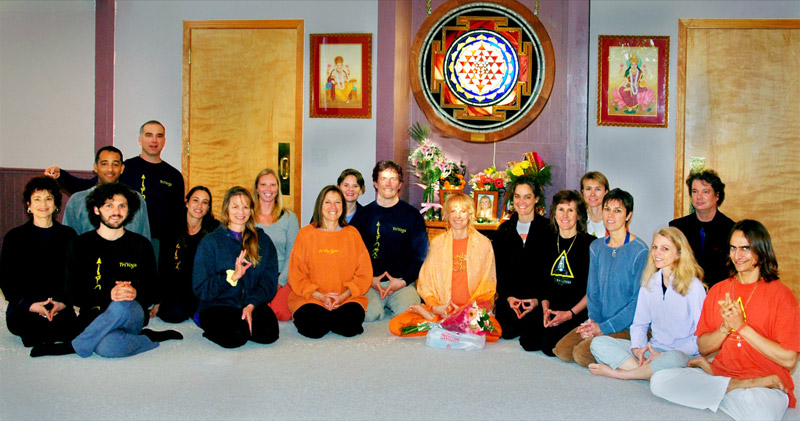 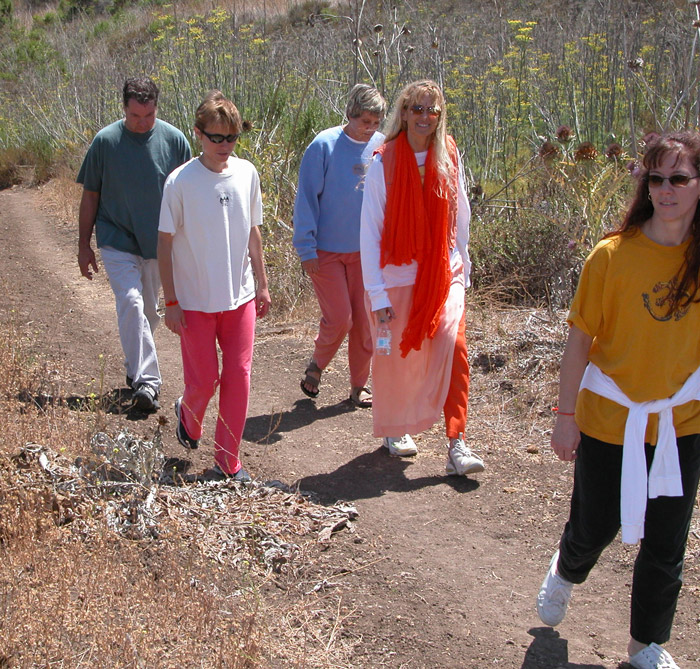 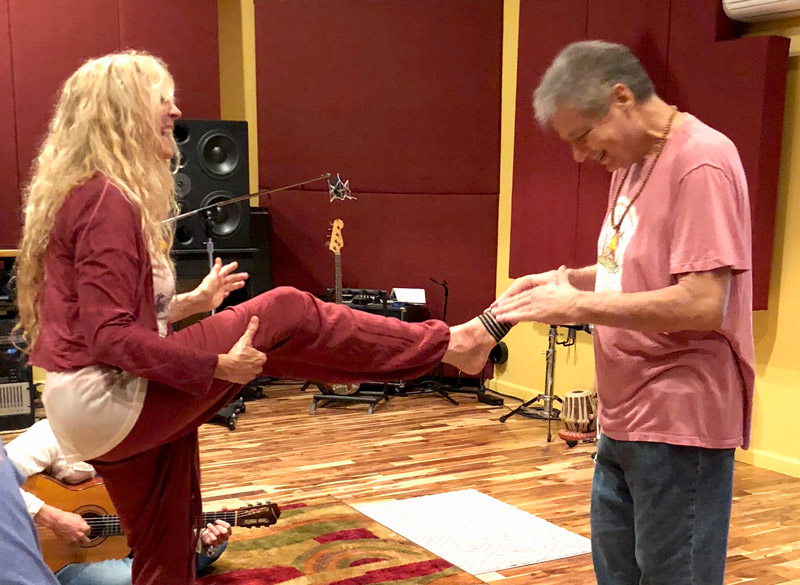 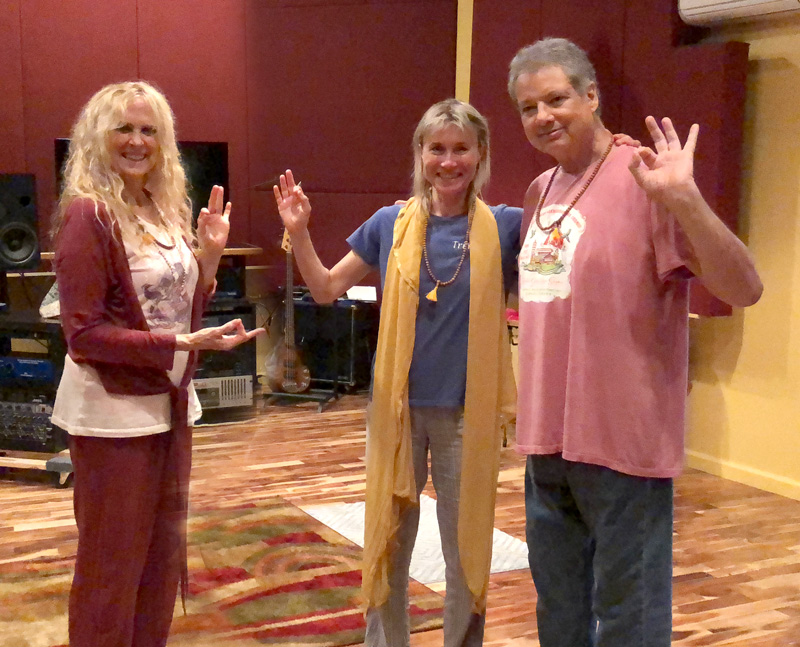 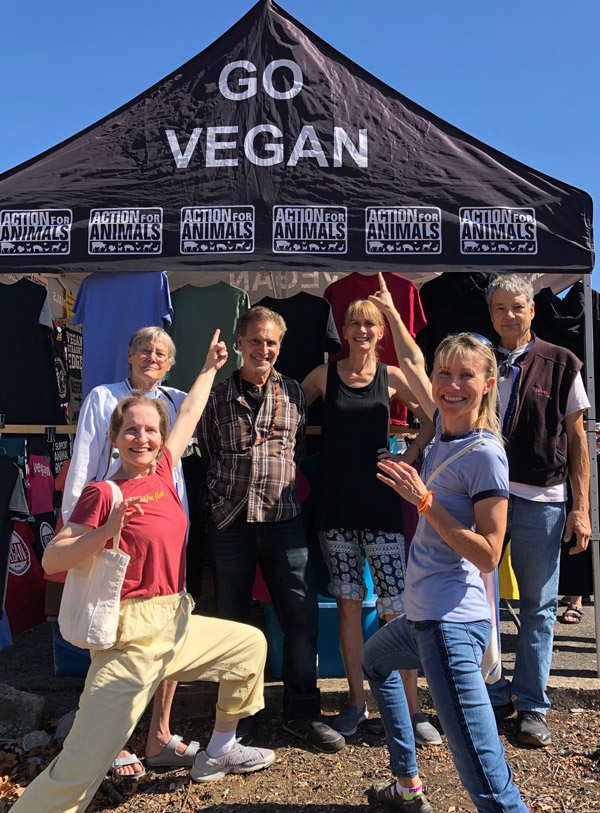 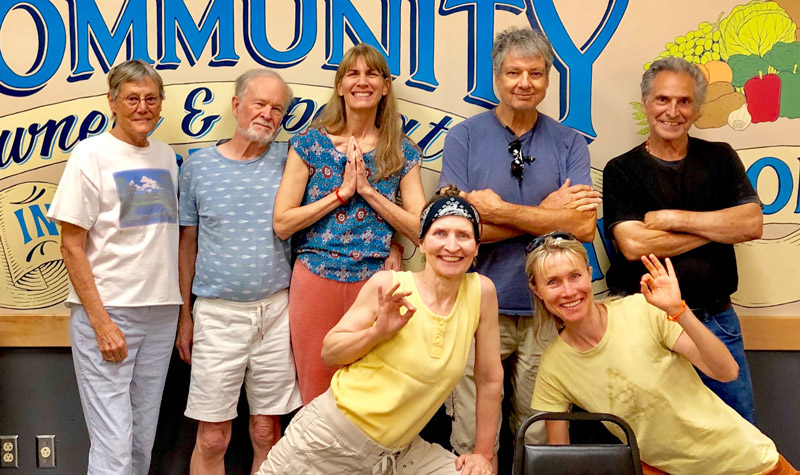 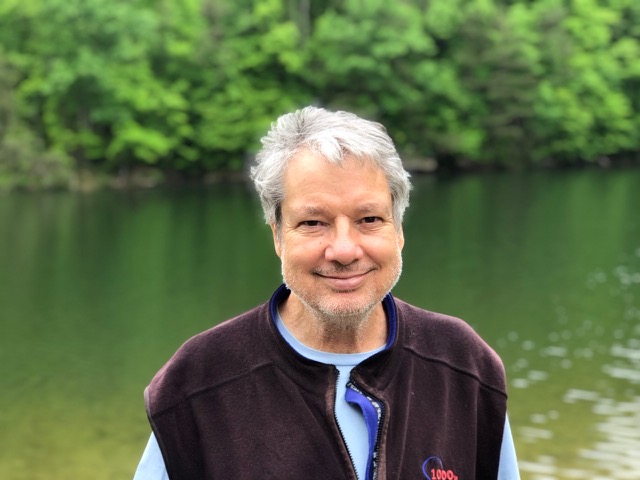 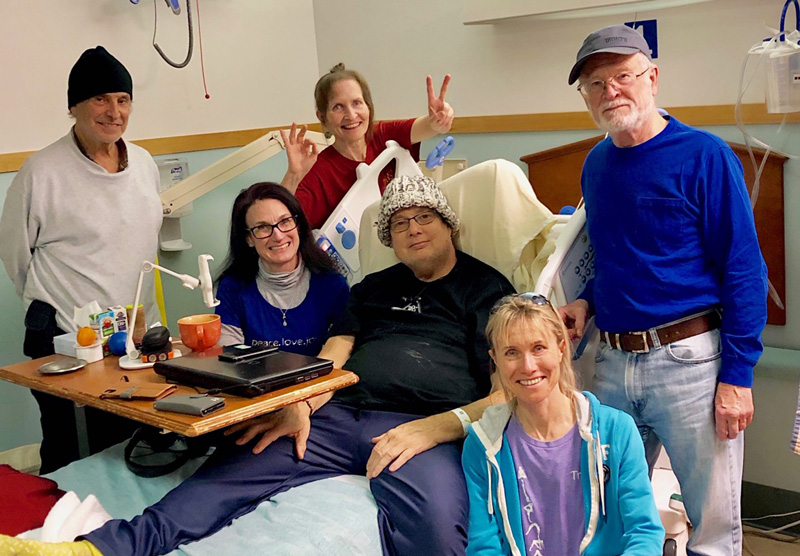 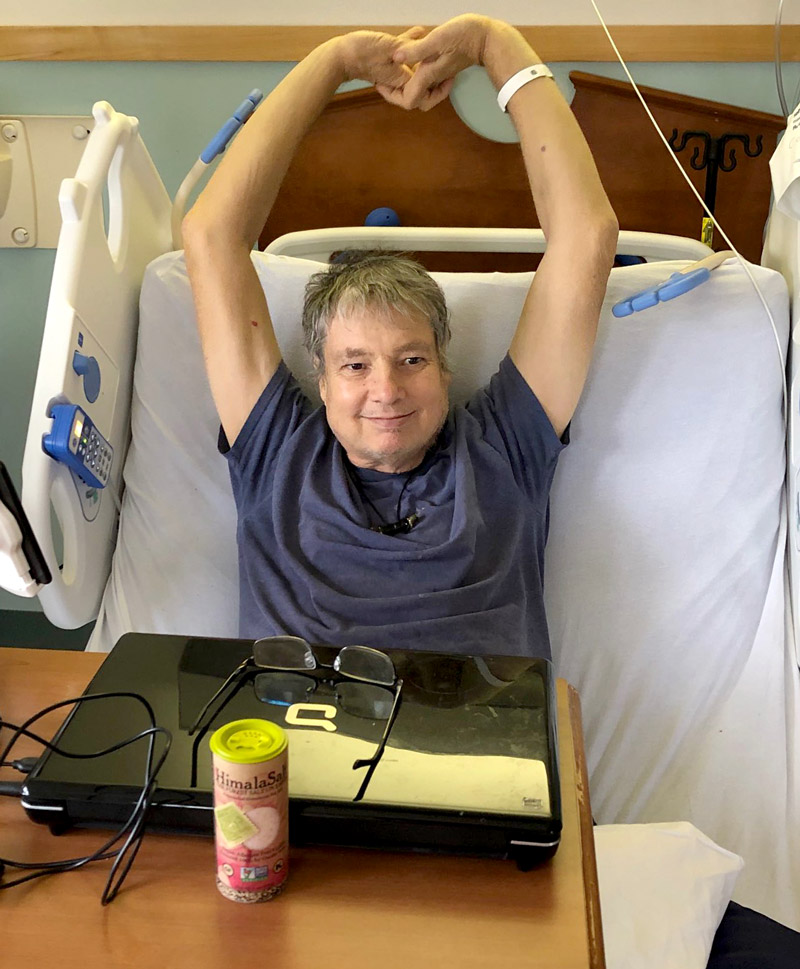 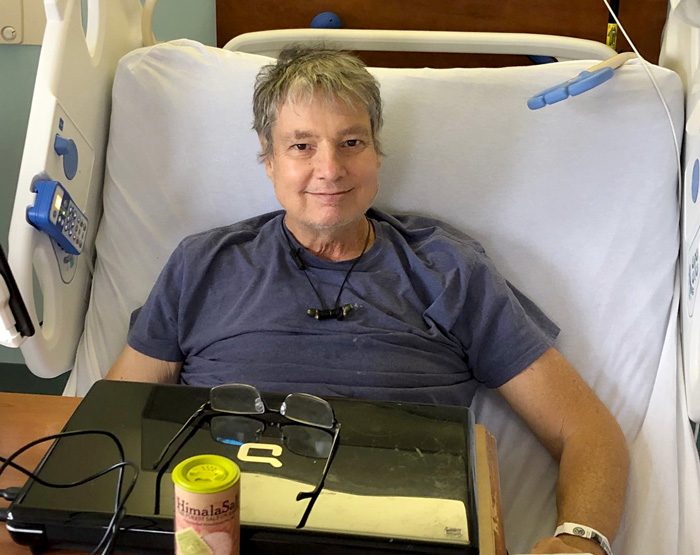 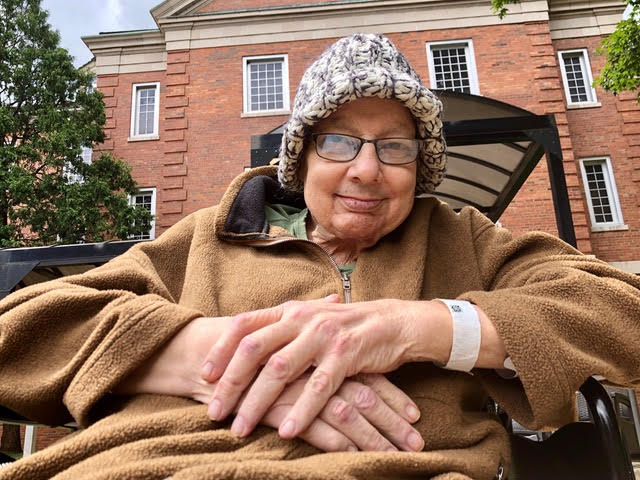 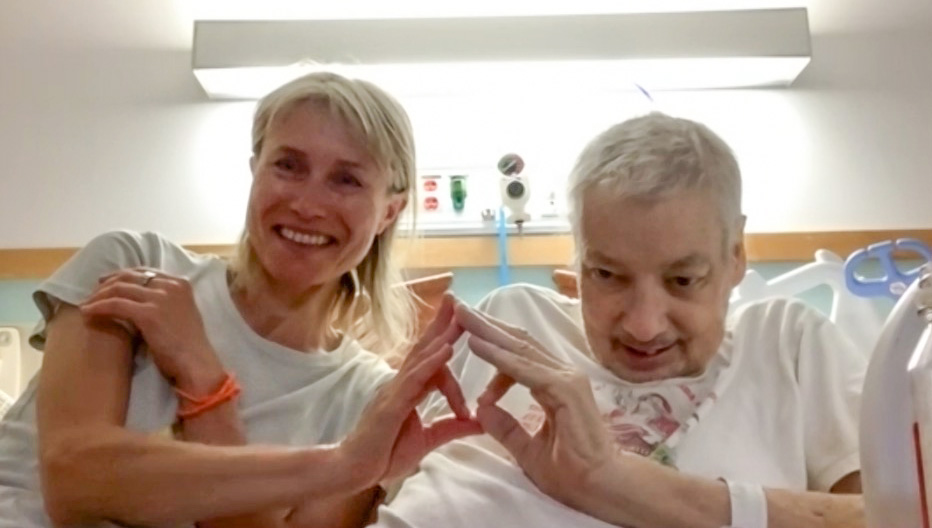 Throughout his journey with prostate cancer, Robert kept his humor until his last breath. He was present. He said he wanted to watch each thought until it finished. He said he would leave when all thoughts were gone. Then, a few hours before leaving, he removed the oxygen from his nose and said, “I am done. The space ship is here.” His oxygen level was at 55 and he had only a few hours remaining. He was asked to return the oxygen so he did. He waited until all left, then a few hours later he sat up and spoke with the nurses. They felt he was doing much better. Then, the next time they came to the room, he had departed at 11:45am. Just hours prior he had said several times “45 is a good time.” He did not want to leave but he did what he needed to do to be prepared. He was looking forward to the deep, blissful meditation. 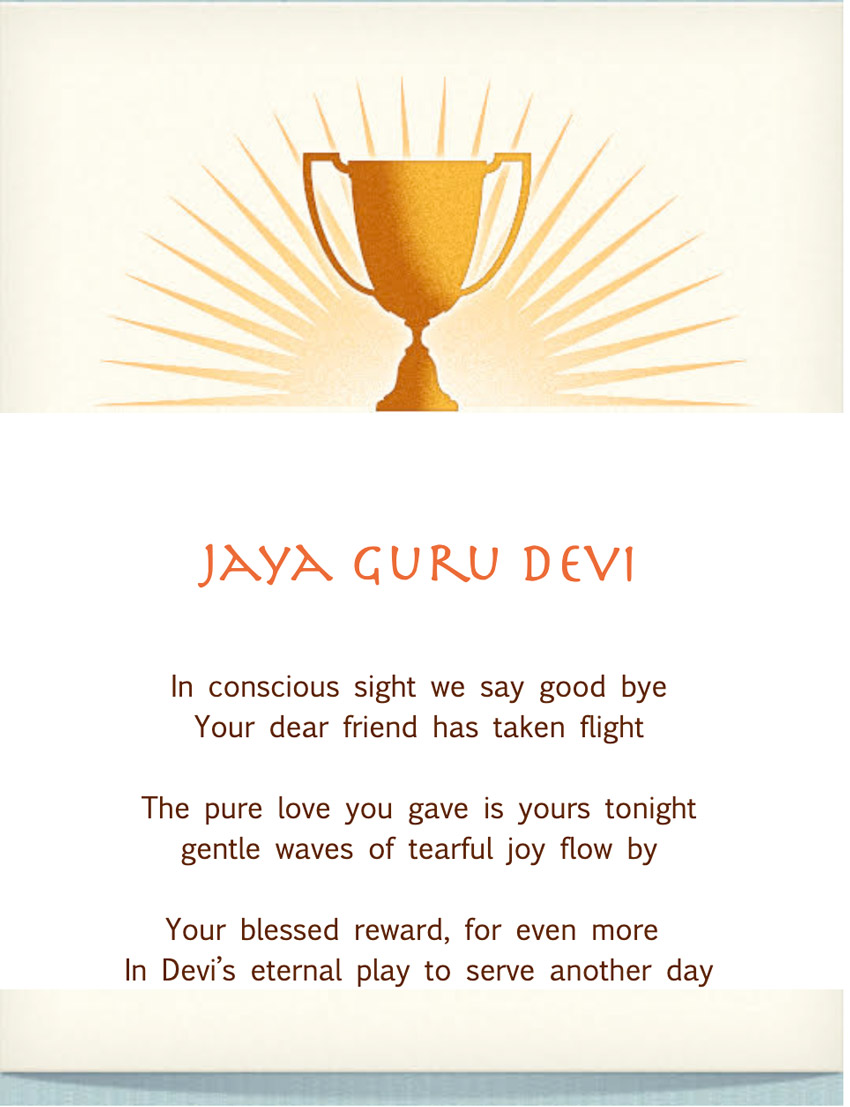 We love you, Katya. Jaya Guru Devi, JAI ROBERT
Yogini Kaliji
Thank You Kaliji! Thank you everyone. JGD 💖🙏🙏🙏 ❤️🙏🙏🙏 Love to everyone and thank you!!!!! Vande TriYoga Mata
Katya Yani
Good bye Robert. Happy conscious travels. Jai Jai Hanuman !!! Beautiful AG message. This morning was a beautiful finale to Robert’s months-long tribute—a testament reflective of his great devotion for you and TriYoga. And that amazing image of him to match. Wow! All so special. He’s now joined the Yogis in the sky!
Anasuya
May Robert’s memory be a blessing. A great generous soul. Condolences to Katya. Feel privilege to participate in tribute to Robert. Sending much love to Katya. Jai Jai Jai Guru Devi.
Brahmi Gold-Bernstein
WE LOVE YOU ROBERT!!!! JGD JGD!!!! BEAUTIFUL CELEBRATION FOR A SPECIAL SOUL. ❤❤❤🌞🌷 Thank You Kaliji and Dr. Pai and AG message. LOVE TO YOU ROBERT AND KATYA. ❤❤
Chandika Devi
Beautiful tribute 🙂 Love to all! Jaya Guru Devi!
Courtney
JGD Robert, a great blessing to know you, Love to you Katya
Constance

Yogini Kaliji Jaya Guru Datta. Robert was instrumental in getting us into the practice of TriYoga. He had to drive the farthest to class, but he would show up weekend after weekend, never late, never even accepting any fees. So we found out that we could give him Starbucks gift cards instead. He wanted to serve TriYoga and you, Kaliji. I am very grateful to him.
Archana KriyaYoga
Robert taught TriYoga to me along With a group of 5-6 Datta devotees. We are ever grateful To Robert for this. Thanks to Kaliji for asking him to teach us. Sad to hear about this, but good to know he is in a better place close to God. May his Soul rest in everlasting peace
Ethindra Ramamurthy
JGD! SGD! I strongly believe he bid goodbye to me. I was doing my daily yoga routine on 16th and out of nowhere I remembered him in my dhyana and told my wife about it as well. I heard this news from Seetharam just now. I was also a student of our yoga guru along with Seetharam. Robert would come all the way to Cupertino from Santa Cruz every Sunday to teach us TriYoga for several years. What a humble and simple teacher! He's the god-send guide for us. We can't thank enough for all your teachings which provide physical and mental strength to us. Robert, your body left the world, but you are living with us as ever. Bless us as ever!
Rama Subramanian
Robert taught us (Bay Area Datta Devotees) the subtle science of Prana Vidya and yoga flows for several months on Kaliji's instruction which has made impact in our yogic life!. We developed a gentle friendship ever since. I recollect those good old days we had coffee together after the classes. We will miss him dearly! Pure soul, Devi has different plans for him! I am sure his prana flows will continue even in the higher realms.

Kaliji, Special thanks to you for introducing such a noble divine soul! He was our true inspiration! We will remember him every single day as we practice Prana Vidya and yoga flows!!!
Seetharam Gopalsamy
Jaya Guru Devi Datta

I loved the eulogy Kaliji wrote for Robert last week. I am fascinated to hear that he left the body with full awareness. I have ben thinking about this a lot – In the Gita, Krishna says to Arjuna that one of the most important (if not the most important) goals of life is to leave the body consciously, immersed in divine contemplation. .

Robert has taught group of us Pranavidhya & TriYoga for few years on weekends at our home in Bay Area. Those were very special weekends for us. He is most sincere & always following Guru’s direction with utmost respect. He is always in joy & always in good spirits. We remember Him everyday as we practice Yoga. Very sad to know the demise. Pray Pujya Swamiji, Kaliji to bless the Soul in higher worlds.