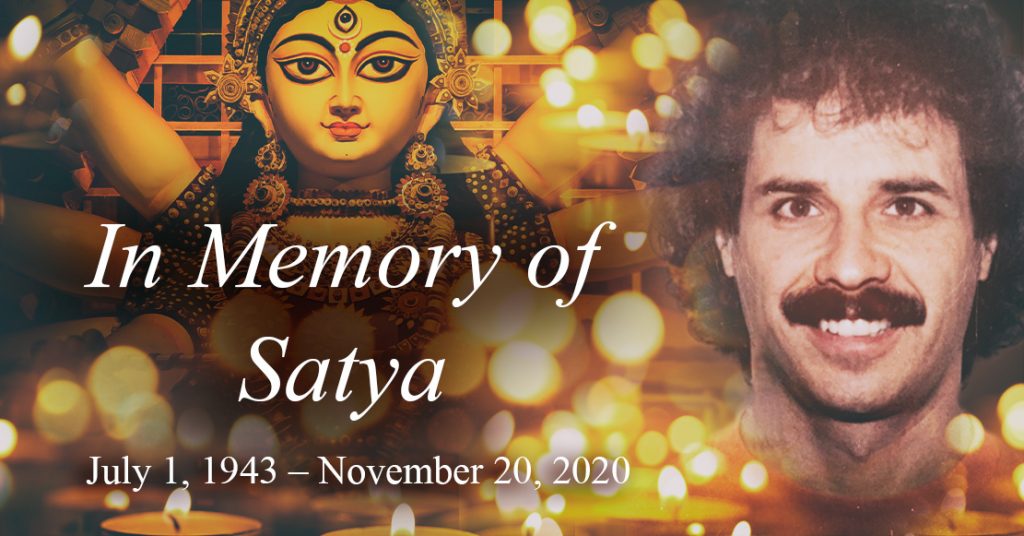 Now the time has come to say goodbye to someone who played a very important role in my earlier life and in the early days of TriYoga. His visit to Earth lasted 77 years. He was always a gambler at heart so 77 is no surprise. Just add an additional 7, for the seven cakras he always aimed to awaken, and then we have the lucky number 777 as his departure flow.
What name shall I give to this most unique, one-of-a-kind personality? He was born as John Kareem Hajjar, and lived on the same street in Andover, MA where TriYoga was born in 1980. He later became known as Paresh, a Sanskrit name given by a yogī in India, meaning Supreme Spirit. Later he renounced the name and named himself Zippoji. He used this name for years, until one day I was inspired to call him Satya. This resonated for him as he was zealous to know the Truth, Satya.
He embodied Satya on many levels. 🙂 He had a zero-edit system when it came to speaking his truth. 🙂 He hid nothing. He shared all—the good, bad, and mixed. Everyone knew exactly where they stood with him. There were no secrets. Upon meeting anyone, he was already speaking with them as if they were long lost friends. There was no such thing as “getting to know a person” before he began to share personal feelings. He shared everything. He was simply himself in all situations.
He had a thirst for Truth. He wanted the answers to life’s deepest questions. He entered my life in 1977. This destiny was so strong that he was predicted to me in detail by the great Seer, Pavana, whose vision was clear as he said “in two weeks you will meet someone who will be very important in your life.” He gave the location and described the ambiance and Satya’s appearance. As destiny planned, we met and I can not thank my lucky stars enough. There is absolutely no doubt that Satya was the one predicted.
I vividly recall standing inside a restaurant when his white Cadillac pulled up in front of the door. He left the engine running as he walked inside, stopped to look around and then right at me. He walked over and intensely said “You know! If I give you a spiritual book, can you read it and tell me what it means?” In my confidence, I responded, “I can read any spiritual book and interpret.” He went to his car, brought back a book called Seth Speaks and said, “I will return here in one week.” One week later with his word kept, he returned and asked if I could explain it to him. I again said “Yes.” We agreed to meet the next day. The moment we got together, jñāna began to flow profoundly as if this source was waiting for someone to ask such questions. And he asked them all.
I have years worth of magical stories during our association. If I have an autobiography one day, due to his significant role these wonderful stories will be included. He was present when prāṇa kriyās began and was present for the first kriyāvatī and for endless subsequent times. He had such faith in the TriYoga Dharma that he supported generously both TriYoga and the music journey.
When I was living in Andover I told Satya abut a dream I had the previous night. An envelope arrived in the mailbox. The letter inside said “Move to Santa Cruz.” Upon hearing this, he immediately said, “Let’s move now!” He believed in my visions and took action instantly. The first day we arrived in Santa Cruz, we went to the local spiritual bookstore, Gateways. Suddenly someone yelled out, “Does anyone know of a good yoga teacher?” After she asked three times, I responded that I teach. I began that day teaching in Santa Cruz and from that starting point so many came to know TriYoga.
Satya and I would spend lots of time in spiritual bookstores in my 20s as I always felt one day there should be a yoga library. He purchased many books as a result. No wonder that on the day he left his body, before it was known to me, I was thinking of him and said to those around that I will name the library at Hamsa/Sohum the Satya Library. The next day we heard he had passed around the time I had been naming the library.
In the last phone message that Satya left to me, he said:
Jai Kaliji
KRIYĀVATĪ
MUDRĀVATĪ
NĀDAVATĪ
SING SING SING

Satya, the visionary, left his body November 20, 2020. For this gambler, who shifted his focus to gamble on TriYoga, and left with a trinity flow 20-20-20, there is no doubt that high in the skies he has finally hit his long sought jackpot!

Satya always felt Kaliji embodied the Durgā energy due to witnessing kriyāvatī and other miracles. When Kaliji was in her mid-twenties, he surprised her with a lion, as a lion is the vehicle of Durgā. Kaliji was often seen in deep meditation on this lion. 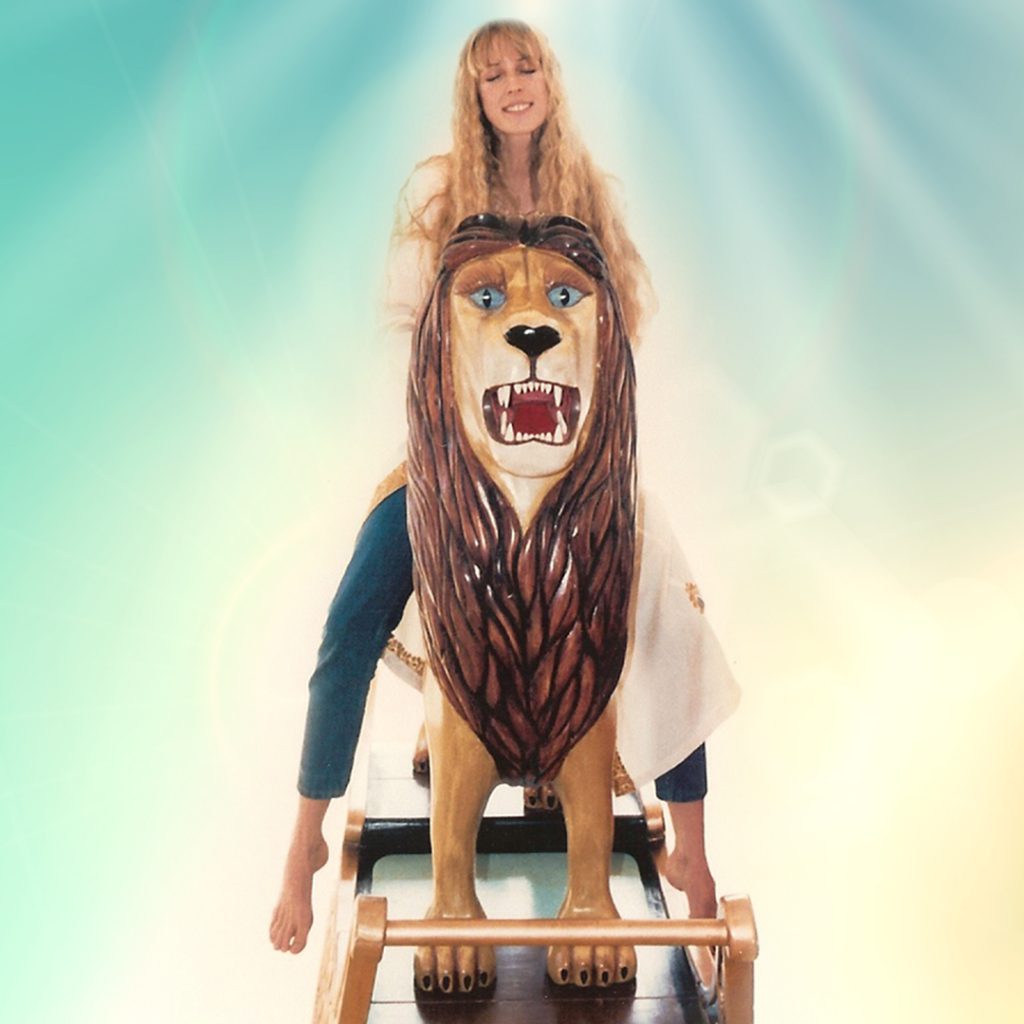 Satya wanted to summarize the teachings he received from Kaliji. For him, their discussions on non-dualism lived in his heart. He wrote, acted, and produced this video clip. 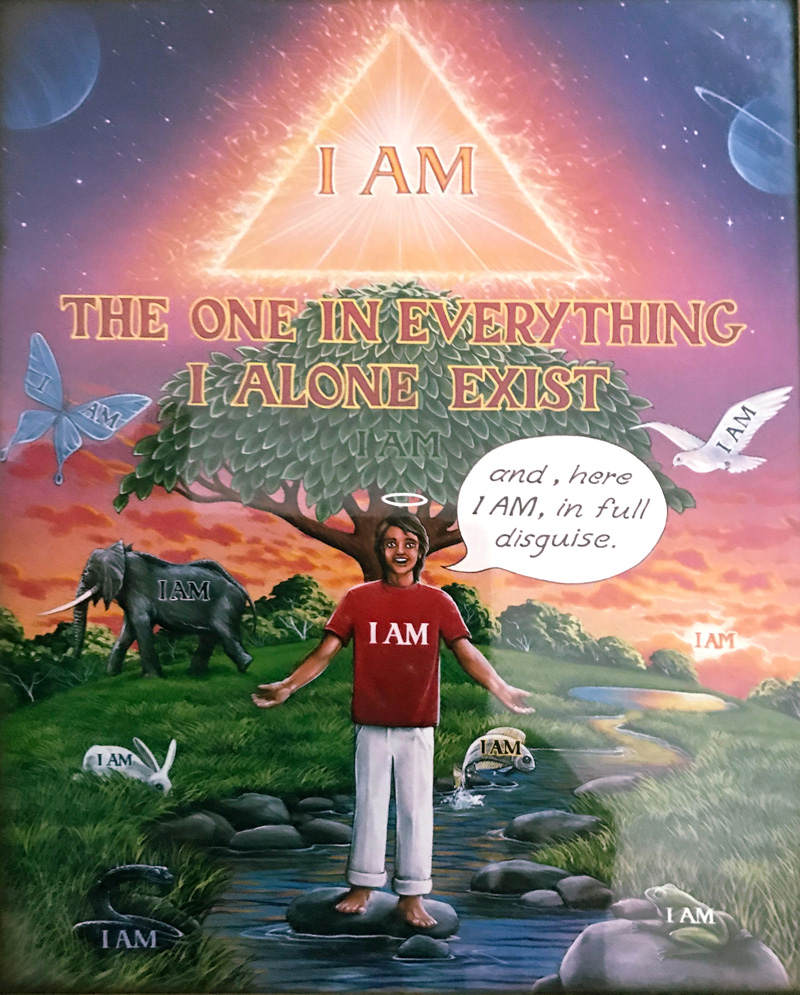 On November 22 during Daily Live Online, Kaliji announced Satya’s passing. His video was shown in remembrance. These comments followed: 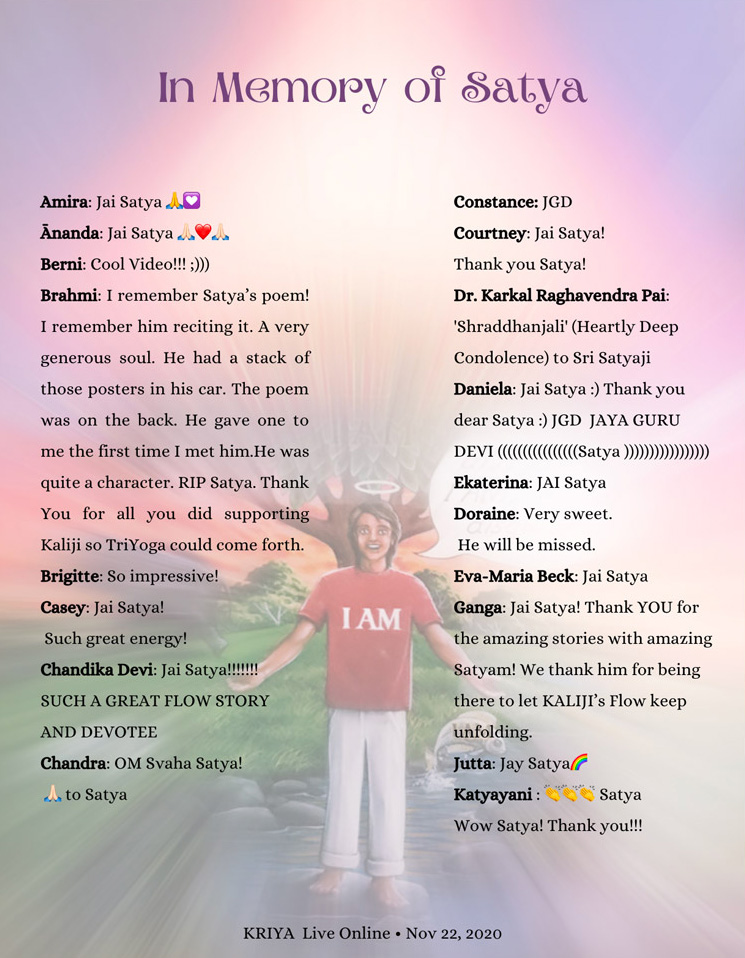 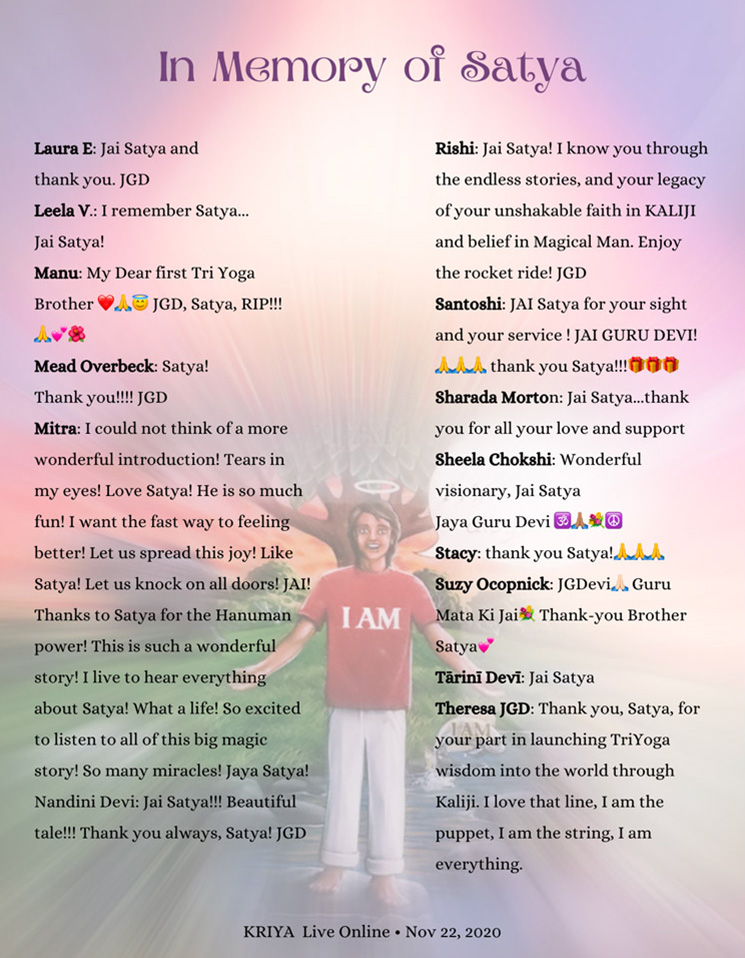 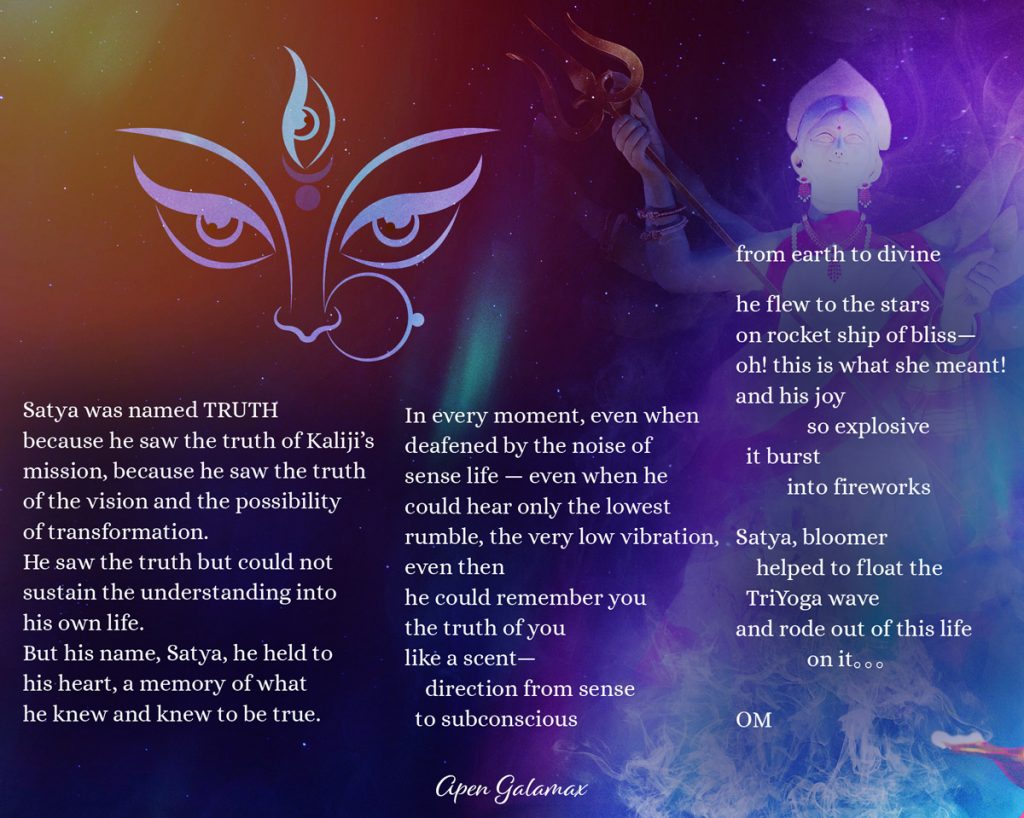 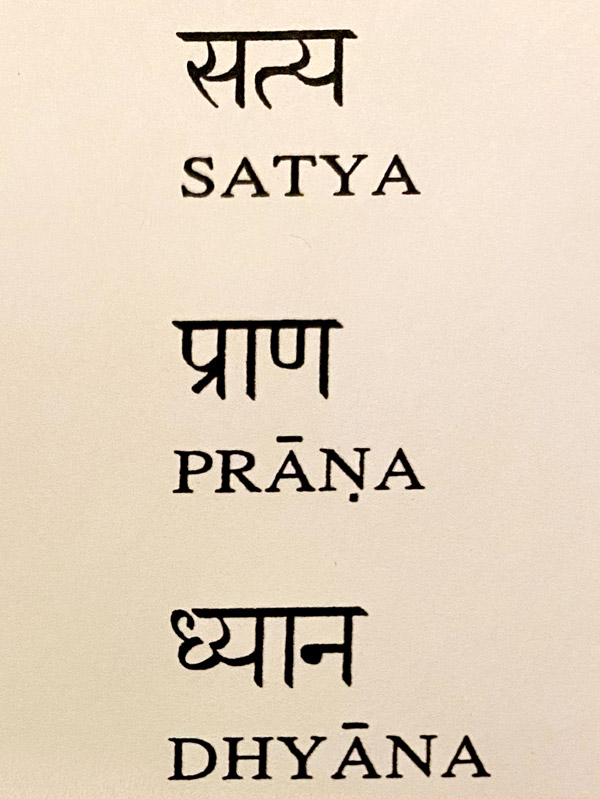 There was always magic between Kaliji and Satya. As soon as Satya’s remembrance was posted, Kaliji asked inside her mind “I wonder if Satya knows we just posted this.” Suddenly, Kaliji turned around, walked to a cabinet, and upon spontaneously opening a drawer the first thing she saw was “SATYA” printed at the top of a Sanskrit textbook page. Beneath his name were the words PRĀṆA and DHYĀNA (meditation). SATYA was present for the first PRĀṆA awakening through Kaliji and during the special MEDITATION on January 5, 1980.

There was always magic between Kaliji and Satya. As soon as Satya’s remembrance was posted, Kaliji asked inside her mind “I wonder if Satya knows we just posted this.” Suddenly, Kaliji turned around, walked to a cabinet, and upon spontaneously opening a drawer the first thing she saw was “SATYA” printed at the top of a Sanskrit textbook page. Beneath his name were the words PRĀṆA and DHYĀNA (meditation). SATYA was present for the first PRĀṆA awakening through Kaliji and during the special MEDITATION on January 5, 1980.